“Hear ye, Hear ye! A fierce and loathesome beast has been terrorizing the villagers througout the land. Track it to it's lair and slay the creature.”

Game of Vaults is a single stage overseer quest in Fallout Shelter.

This quest takes place in a building with a random layout. Enemies encountered may include mole rats in groups of three to four, irradiated radroaches paired with a normal radroach, radscorpions in pairs. The "dragon" (an alpha deathclaw) is accompanied by two additional deathclaws. Once defeated, the room it is in contains a legendary outfit recipe. The optional treasure room contains two random rare items. At or near the top floor is the "princess," who is always named Jonathan, but is otherwise a random rare dweller wearing naughty nightwear who will join the player's vault vault. The room he is in contains a rare junk.

The name of the quest is a reference to the book series and HBO TV series, Game of Thrones. "Jonathan" refers to one of the main characters, "Jon Snow." 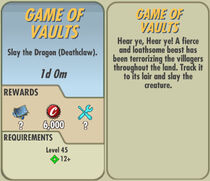