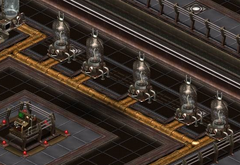 “Guys! I have a great idea about a post-nuclear RPG!”

Game designer brain is one of the brains that the Calculator uses in Vault 0.

This is one of eight brains that are wired to the Calculator. This particular one is from a game designer who has an idea for a post-war RPG.

If the Warrior kills the brain, their reputation is lowered.

Since the Calculator needs to be dealt with, the Warrior needs to crush this brain to continue with the mission.

Retrieved from "https://fallout.fandom.com/wiki/Game_designer_brain?oldid=3518890"
Community content is available under CC-BY-SA unless otherwise noted.