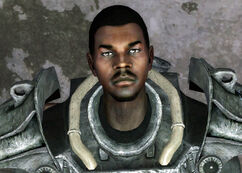 Gallows Humor refers to an unmarked quest in Fallout 3.

Talk to some of the members of the Lyons' Pride in the Great Hall after gaining entry to the Citadel. They will tell the Lone Wanderer about a betting pool to try and guess Gallows' real name. One can ask Knight Captain Gallows about it after hearing about the bet. If one's speech skill is high enough, they can convince Gallows to tell them his real name. After one finds out his name, they can speak to Paladin Glade, who is running the betting pool. Glade can be found near Gallows in the Great Hall in the A Ring area. Gallows says his real name is "Irving," and asks that he just be left alone.

The reward is the current betting pool, which has risen to 1000 caps.

Gallows humor (also known as dark humor) is a style of comedy that makes light of subject matter that is generally considered taboo, particularly subjects that are normally considered serious or painful to discuss, as a reference to gallows, a scaffold used for execution by hanging.

Retrieved from "https://fallout.fandom.com/wiki/Gallows_Humor?oldid=3226534"
Community content is available under CC-BY-SA unless otherwise noted.