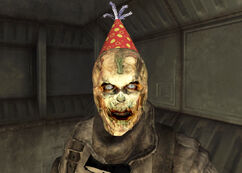 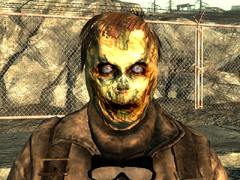 Gallo without his hat

Gallo is a hostile ghoul found inside the County sewer mainline in 2277.

Recently celebrating his birthday, Gallo invited his two favorite gnomes, dressed them in party hats, and carved up a variety of feral ghoul cutlets for the occasion. A mixture of solitude, escaping sewer gas, and ghoul lifespan has made Gallo quite, quite mad.[1]

Gallo has a small Nuka-Cola collection - including two trucks, five bottles, four Nuka-Cola bar stools, a neon Nuka-Cola sign, a Nuka-Cola clock above his bed, a Nuka-Cola lamp on his table, and a Nuka-Cola Quantum in his safe. He also has a Radiation King television in pristine condition on his shelf and keeps a pen of small radroaches as pets. He stores dead feral ghouls in the open refrigerator, and two plates of strange meat can be found on the bar and around his home. Gallo lives by himself and attacks anyone on sight. In addition, he has set up traps outside his home to kill any intruders.

Gallo's storage key can be used to access a storage closet with a substantial number of workbench items.

Gallo appears only in Fallout 3.

Retrieved from "https://fallout.fandom.com/wiki/Gallo?oldid=3244227"
Community content is available under CC-BY-SA unless otherwise noted.