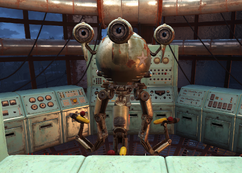 The director of the General Atomics Galleria

Galleria is a miscellaneous quest in Fallout 4.

Several options involve passing speech checks. It is also possible to acquire a General Atomics ID card from the General Atomics factory which will allow the player character to identify themself without a speech check. If the player character succeeds in any of the speech checks or presents the ID, they can reopen the galleria and get the grand prize for the reopening raffle. If one does attempt a speech check (difficulty not dependent on Charisma) and fails, the director will become hostile along with all the other robots at the facility.

Alternatively, if the director has been destroyed the player character can use a password saved in the supervisor's terminal to access the computer in the director's office. However, the terminal's functions are disabled as long as the director is still functional. The terminal will provide the player character with the options to start the grand reopening, shutdown all robots, or initiate a self-destruct sequence in all of the robots. Updating the director's firmware on their computer (reopening the galleria) will immediately end the hostility of all the remaining Mr. Handies.

If the option to "start the Grand Reopening" is selected in the director override terminal, the remaining robots will be friendly again.

Retrieved from "https://fallout.fandom.com/wiki/Galleria?oldid=3247726"
Community content is available under CC-BY-SA unless otherwise noted.