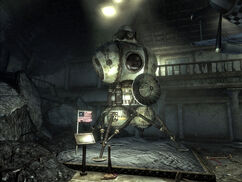 “People of the Capital Wasteland, you can HEAR MEEEE!!!! Yeeeaa haaaa!!! You can't stop the signal, baby!”— Three Dog, announcing live that his signal is back after completion of the quest

Galaxy News Radio is a main quest in Fallout 3. It is also an achievement on the Xbox 360 and PC, and a bronze trophy on the PlayStation 3. The quest involves retrieving the communication relay dish from the Virgo II Spacecraft in the Museum of Technology and installing it at the top of the Washington Monument.

The quest may be given immediately after meeting Three Dog.

Completing the Megaton portion of the main storyline quest Following in His Footsteps, Three Dog will offer the Lone Wanderer information about their father in exchange for restoring the satellite relay dish for Galaxy News Radio. Accepting his offer to start the quest immediately, or failing the speech check, begins the quest on those terms.

Succeeding at the speech check makes this an optional quest, with the reward being the location of a weapons cache. The cache still exists if Three Dog does not give the information, and its location is near that of the Blood Ties quest, which can be started in Megaton.

Find the Museum of Technology

Three Dog will give directions to (place map markers for) the Museum of Technology and the Washington Monument. A door leading north in the Galaxy News Radio building leads downstairs, with a one-way door to the northern section of Dupont Circle and the Metro Junction entrance; the Metro is the only access to the museum and the monument. There is a quicker southern route to the objective as well (see notes).

Inside the Museum of Technology, one will need to find the Virgo II lunar lander, which is located in the west wing of the building. The player character can obtain this information from a terminal in the atrium to the right of the entrance when one comes in. Note, however, that the museum is occupied by super mutants. The goal is to reach the west wing going through the Vault-Tec demonstration vault, upstairs. One can also attempt to retrieve Jiggs' loot, using the museum information terminal in the atrium.

In the west wing, locate the Virgo II lunar lander. The west wing is divided into 3 areas: the Planetarium, the Delta IX Exhibition, and the Virgo II Exhibition. Be ready for a fight as all these areas are patrolled by super mutants. Either a Science skill of 25 or Lockpick skill of 50 is required to get through the Planetarium. If one o not have those stats, one must go through the Delta IX rocket exhibit.

Upon finding the lander and clearing out all hostiles, grab the dish by interacting with the lander and return to the exit; note that one must aim the crosshairs at the dish, not just any part of the lander, for this to work.

There is also a safer route to get to the Museum of Technology. Opposite the GNR plaza is a building (which, if Sarah Lyons has been followed, one would have already been through). Travel through this area, killing the feral ghouls along the way. Upon exiting there will be a feral ghoul and a feral ghoul roamer which carries a blue pass card. Down the road one will also see a raider camp.

Head into Dupont Circle station and engage in battle with two super mutants. Run straight across and go through some doors, the pass through the small raider camp. After passing through the railroads, there is a small enclosure with a raider as well as some first aid supplies. Next the player character will come to a dungeon with a large number of raiders. With a Science skill of 50, it is possible to hack the terminal to change the nearby turret's trajectory, killing a few of the raiders. After this, the player character will come to an utility gate with a injured raider who can easily be taken out. Head on into Metro Central.

There is a feral ghoul roamer on the stairs leading to the entrance, after it is dealt with, activate the electrical switch to open the floor. Make sure to grab the Grognak the Barbarian on the table before heading into the tunnels. There is a raider with a 10mm submachine gun slightly further into the tunnel. One can usually avoid the last few enemies by running up the escalator and exiting the station.

The museum is directly to the right after exiting the station. There are several super mutants in the area, so it is best to cut directly into the museum.

Exit the museum and head west for the Washington Monument. It is also in The Mall area and can be seen from the entrance of the Museum of Technology as a giant obelisk. There are Brotherhood guards stationed there and one will need to use the terminal to open the security doors. The password is given to the player character at the beginning of the quest. Take the elevator to the top and interact with the radio equipment to install the dish. Finally, return to Three Dog at Galaxy News Radio to finish the quest.

After the relay has been repaired, Three Dog makes a one-off broadcast which includes the phrase "you can't stop the signal." This is a tagline of Mr. Universe from the 2005 sci-fi movie Serenity. Mr. Universe broadcasts the truth, whether pleasant or not. This is similar to Three Dog fighting the "good fight".

Retrieved from "https://fallout.fandom.com/wiki/Galaxy_News_Radio_(quest)?oldid=3449905"
Community content is available under CC-BY-SA unless otherwise noted.