One of the most prominent corporate entities in pre-War America, GNN was a mass media corporation with several distinct divisions, such as Galaxy News Radio. Its programming was decidedly pro-government, putting a spin on every news story to present the United States in the best possible light.[1][Non-game 1] Perhaps the most extreme example of this tendency was broadcasting the execution of a Canadian insurgent by United States soldiers in power armor while presenting it as keeping the peace in newly annexed Canada.[2] Another example is the spinning the massive radioactive pollutant runoff causing mutations in the local crustaceans population of the Charles River drainage basin.[3]

Although the GNN was no longer operating after the nuclear war, some of its programs continued playing on repeat for several years after the end of the war.[2] John Henry Eden also adapted fragments of GNN news reports when creating its presidential persona.[4]

A Galaxy News Radio location is included in Fallout Shelter. 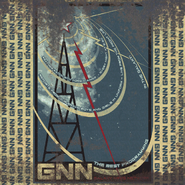