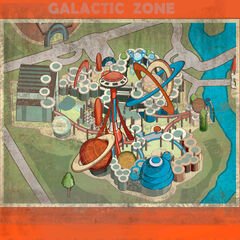 “Blast off from starbase Nuka for thrills and space-age technology that are out of this world! Don't forget your blaster!”— Promotional quote

The Galactic Zone is a location in the Nuka-World Amusement Park in 2287.

The Galactic Zone opened in 2072 and was the last of the parks to open before the bombs fell in the Great War. John-Caleb Bradberton wished to bring customers a taste of the future with the Galactic Zone and it ended up being the most popular attraction at Nuka-World during the time of its opening. This park featured a unique collaboration between the Nuka-Cola Corporation, Vault-Tec Corporation and RobCo Industries, among other companies.

The Nuka-Galaxy attraction of the Nuka-Cola Corporation took park guests on a space adventure through a roller coaster spanning a galaxy while helping Nuka-Girl fight off aliens. Vault-Tec's Among the Stars attraction showed guests a glimpse of preparing for the future with Vault-Tec vaults being used to colonize distant planets and RobCo's RobCo Battlezone demonstrated the latest and greatest in robot technology to guests in an arena pitting various robot models against each other.

Since the Great War, this section of the park became a ground for traders from Nuka-Town USA to acquire scrap materials for use and trade. Eventually the traders came across Star Control and its star cores. Kendell Alston, thinking his daughter Tiana Alston's explanation that the cores were 'redundant' meant they were okay to take and sell, started gathering the cores up. However, it was around this time that Colter and his raider gangs took over Nuka-Town, leading to the idea that Star Control's defensive mode would be able to save them.

Shortly thereafter, they came to realize that they had taken too many cores and that it was unsafe to activate that setting. Despite Tiana's warning, Kendell would activate Star Control before the cores could be regathered in order to safely activate it. As the robots and defenses in the park came online, they began attacking the traders within the Galactic Zone. Tiana and the remaining traders eventually perished while trying to make a break for the gates to escape the zone. Their remains now lie just outside of the entrance for anyone visiting the Galactic Zone to discover.

An enclosed amusement park, filled with advanced robots: Mr Frothies, eyebots and Nukatrons, all of which are hostile to the Sole Survivor until they are made otherwise using the Star Control terminal. Directly across from the main entrance is the Starport Nuka ride, with the Starlight Interstellar Theater to the southern side, neighboring Vault-Tec: Among the Stars and the RobCo Battlezone and Nuka-Galaxy in the northern half.

The Galactic Zone appears only in the Fallout 4 add-on Nuka-World.

Nuka-Cooler recipe
Add a photo to this gallery
Retrieved from "https://fallout.fandom.com/wiki/Galactic_Zone?oldid=3482212"
Community content is available under CC-BY-SA unless otherwise noted.