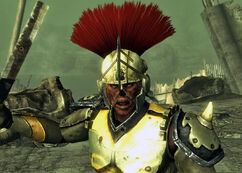 Gaius Magnus is a centurion located in Dry Wells in 2281. He appears only after completion of the Fallout: New Vegas add-on Lonesome Road if the Courier chooses to launch Ulysses' nuclear missiles against Caesar's Legion.

Gaius Magnus is a centurion who had conquered the 87th tribe that assimilated into Caesar's Legion. He was given the distinct honor of wearing the unique armor of the 87th Tribe. In 2281, he is in Dry Wells with some of his legionaries, who become marked men after the Courier sent an atomic strike to the area.

He has very high health, and like other ghouls and marked men, he also constantly regenerates health from the high radiation in the area.

His name is an amalgamation of two powerful and historically influential Roman generals who lived during the late Roman Republic, Gaius Julius Caesar, and Gnaeus Pompeius Magnus. Both were part of the First Triumvirate of Rome, along with Marcus Licinius Crassus.

Gaius Magnus awaits
Add a photo to this gallery

Retrieved from "https://fallout.fandom.com/wiki/Gaius_Magnus?oldid=3505240"
Community content is available under CC-BY-SA unless otherwise noted.