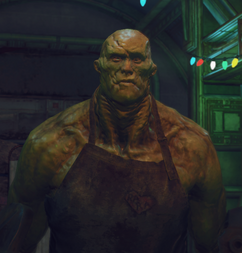 Gail is a super mutant in Appalachia in 2103.

Years ago, Gail found Ra-Ra and bonded with her, as they were both alone and had nobody to take care of them. Since then, they have protected and watched out for each other, with Gail becoming a surrogate mother to Ra-Ra.

Gail and Ra-Ra joined Meg's raiders sometime after returning to Appalachia in 2103. She feels frustrated by the fact that the rest of the raiders make up excuses to not help her when she needs it, claiming her temperament is too poor to offer assistance. She insists that if she is angry, it is precisely due to the lack of help. She also has a disparaging opinion of other super mutants but believes that they would benefit from the same type of friendship she has found with Ra-Ra.

After the Vault 79 heist is over, Gail and Ra-Ra will return to their room in the Crater Core. Gail can be spoken to, and replying positively to one of her dialogue options will result in a small gain in Raider reputation.

Gail appears only in Fallout 76, introduced in the Wastelanders update.

Retrieved from "https://fallout.fandom.com/wiki/Gail?oldid=3449460"
Community content is available under CC-BY-SA unless otherwise noted.