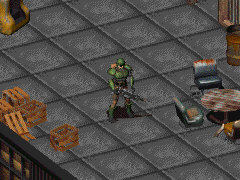 Exterminate the deathclaws
Get weapons for the Blades

Gabriel is the leader of the Gun Runners in 2161. He leads a gang-turned-company outfit specializing in manufacturing weapons and ammunition that operated in the Los Angeles area from 2130s to early 2160s.

Hailing from the Hub, Gabriel is a large man, concerned with the well-being of his subordinates. He migrated to the Boneyard around 2131, Gabriel remade the gang into a group of machinists, manufacturing weapons and ammunition. They scavenged what workable metal they could, settling into a factory in the northeast of the great Boneyard.[1]

All was fine, until around 2151 the deathclaws appeared in the old warehouse to the southwest, affecting the Gun Runners' trade route to Adytum.[1] Worse, in 2158, Jon Zimmerman hired the Regulators to secure the settlement. The brutal mercenaries started squeezing the Gun Runners using their control over the supply of raw materials to their advantage.[2]

Gabriel has been looking for an exit strategy ever since. The Gun Runners are stuck in a holding pattern, since there is no alternative to Adytum, but they cannot move all of their equipment (including large lathes and mills) due to the deathclaws.[3][4] Though they fell over 20 between 2159 and 2161, they just keep coming.[5][6]

Gabriel appears only in Fallout.

Retrieved from "https://fallout.fandom.com/wiki/Gabriel_(Gun_Runners)?oldid=3457948"
Community content is available under CC-BY-SA unless otherwise noted.