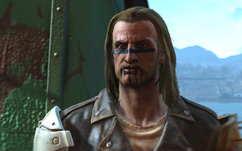 Gabriel, also known as B5-92, is an escaped synth turned raider living in the Commonwealth in 2287.

B5-92 is a synth that escaped the Institute at some point prior to 2287. With help from the Railroad, he had his mind wiped and started a new life in the Commonwealth. He eventually fell in with some raiders based out of Libertalia and rose to become their new leader. The Sole Survivor is tasked with recovering them in the Institute quest, Synth Retention.

Gabriel is terminal-illiterate. A log on the terminal in the captain's cabin after he assumes control of Libertalia shows his eventual frustration trying to clear James Wire's old files from the machine.

Gabriel appears only in Fallout 4.

Retrieved from "https://fallout.fandom.com/wiki/Gabriel_(Fallout_4)?oldid=3425771"
Community content is available under CC-BY-SA unless otherwise noted.