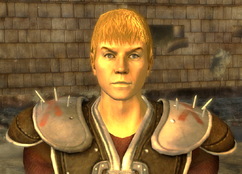 Keep Your Eyes on the Prize

“I was just finishing up making an example of this town, delivering a sermon, if you will.”

Gabban is a Frumentarius in Caesar's Legion in 2281.

Gabban appears in Nipton if Vulpes Inculta dies before the Courier reaches Nipton or Render Unto Caesar has started.

Retrieved from "https://fallout.fandom.com/wiki/Gabban?oldid=3335990"
Community content is available under CC-BY-SA unless otherwise noted.