The G.E.C.K. or Garden of Eden Creation Kit is a world object in Fallout 76.

A terraforming device created by Future-Tec, a division of Vault-Tec Corporation, to ease the process of harnessing the post-nuclear wasteland for vault dwellers. The newest and most advanced in survival technology, the G.E.C.K. was developed by Stanislaus Braun who served as the director of Vault-Tec's Societal Preservation Program.[1] A fully self-contained terraforming module, it was capable of creating and sustaining life in a post-War environment. The kit included seed and soil supplements, a cold-fusion power generator, matter-energy replicators, atmospheric chemical stabilizers and water purifiers.[1]

Vault 94 was issued one G.E.C.K. for the purpose of recolonizing one year after the Great War. The vault was experimental, with no weapons or extra resources, and inhabited by a non-violent, faith-based commune. After the vault members made contact with the town of Harpers Ferry, the town's mayor Miranda Vox sent a group consisting of Billy, Cole, Lucas, and Red to investigate the vault and report back. The group of four men were welcomed in with open arms, but growing suspicious of the vault's complacency, and expecting it all to be a trap, Cole ordered his men to kill all of the dwellers.[2]

The expedition members eventually gained access to the G.E.C.K. wing with little resistance from the pacifist vault dwellers.[3] At 5:51 PM, assuming the G.E.C.K. was some sort of mind-control machine, the survivors shot the device with a minigun.[4] This triggered a meltdown of the device's fusion generator, resulting in a massive level-6 nuclear explosion with a radiation surge of 7800 rad/s.[5] Significant mutations were expected for any surviving organisms within the affected area, an estimated 5.5 km.[6][7] A thick fog poured from the vault’s entrance, rapidly intensifying the area’s swampy environment and mutating the region's dense foliage.[8][9] 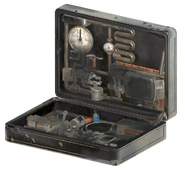