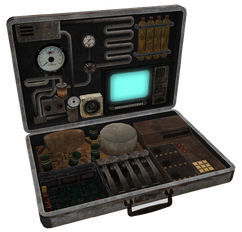 The G.E.C.K. or Garden of Eden Creation Kit is a terraforming device created by Future-Tec, a division of Vault-Tec Corporation, to ease the process of harnessing the post-nuclear wasteland for vault dwellers.

The newest and most advanced in survival technology, the G.E.C.K. was developed by Stanislaus Braun who served as the director of Vault-Tec's Societal Preservation Program.[1] A fully self-contained terraforming module, it was capable of creating and sustaining life in a post-War environment. The kit included seed and soil supplements, a cold-fusion power generator, matter-energy replicators, atmospheric chemical stabilizers and water purifiers.[1]

When the Lone Wanderer locates their father in Vault 112, they learn that in order to make Project Purity work properly, a G.E.C.K. is required. They must travel to Vault 87, a highly irradiated location, where they can acquire the G.E.C.K. unit.[2]

Retrieved from "https://fallout.fandom.com/wiki/G.E.C.K._(Fallout_3)?oldid=3438833"
Community content is available under CC-BY-SA unless otherwise noted.