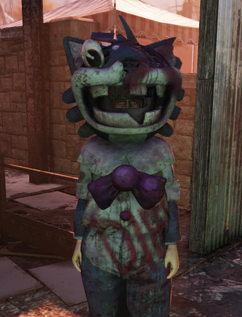 Fuzzy Brenda is a woman representing Mr. Fuzzy of Camden Park in Appalachia in 2103.

Brenda wears an old Mr. Fuzzy costume and tries to convince everyone that walks by to go in and enjoy the park and its attractions, utilizing cat-themed puns, despite the abandoned nature of the park.[1] They are also convinced that the Scorched and other creatures are merely happy customers, enjoying their time at the park.[2][3] However, they are supposedly within rights to call park security should any roughhousing between guests occur, as the park is a family-friendly establishment.[4]

Although they are aware that they are not the real Mr. Fuzzy, they see him as an ethereal entity, representing him and spreading joy wherever they can until he comes back or reveals himself to the world.[5] They are also aware of what attractions are present at the park,[6] specifically those that continue to function,[7] and those that are "out of order",[8] though still asking anyone who visits to purchase tickets,[9] and to visit the gift shop before leaving.[10]

Fuzzy Brenda appears only in Fallout 76, introduced in the Wastelanders update.

Retrieved from "https://fallout.fandom.com/wiki/Fuzzy_Brenda?oldid=3296699"
Community content is available under CC-BY-SA unless otherwise noted.