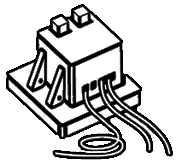 The fusion pulse charge is a device used to detonate the nuclear bomb in Megaton in Fallout 3.

It is given to the Lone Wanderer by Mister Burke in Moriarty's Saloon.

The detonator of the fusion pulse charge is set up by Mister Burke on Allistair Tenpenny's balcony. With its characteristic glowing red button, it is used in order to activate the charge and detonate the Megaton bomb. Mister Burke gives the "honor of pushing the button" to the Lone Wanderer.

The fusion pulse charge appears only in Fallout 3 as a quest item. Its detonator is a world object in the game, which may be used in The Power of the Atom quest. It does not appear in the Japanese version of the game. Though it no longer serves any purpose, this item is also found in the game files for Fallout: New Vegas.

Retrieved from "https://fallout.fandom.com/wiki/Fusion_pulse_charge_(Fallout_3)?oldid=3125535"
Community content is available under CC-BY-SA unless otherwise noted.