004709BC
“If you're too lazy to visit a power plant, why not make your own fusion core from highly unstable materials?”— Fallout 76 Vault Dweller's Survival Guide p.105

The fusion core is a type of ammunition in Fallout 76.

This section is transcluded from Fusion core. To change it, please edit the transcluded page.

Standardized fusion cores are a high-grade, long-term nuclear battery used for military and commercial applications before the Great War.[1] Used by civilians to power a multitude of devices, from automobiles,[2] to generators,[3] the military instead used them for warfare, supplying power armor and some Gatling laser models with energy. Standard core interfaces were developed across the board to allow for power armor frames to use cores salvaged from weapons or generators.[4] The fusion core also can be hooked up to certain melee weapons via jumper cables.[5]

Another benefit is that cores can be set to overload, for use as improvised explosives or to deny a power armor suit to the enemy by destroying it.[6]

Fusion cores are used to power and activate suits of power armor as well as providing ammunition in certain weapons, such as the Gatling laser, which utilizes them; each fully-charged core provides 500 shots.

Can be looted in a variety of places

Fusion cores are susceptible to physics, so they may fall off platforms and may not be in the exact location listed below. Additionally, other players may loot fusion cores, preventing them from appearing.

Before patch 1.0.4.13, fusion cores would replenish to full charge upon joining another world.[verified] 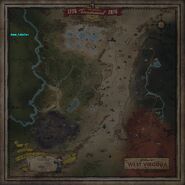