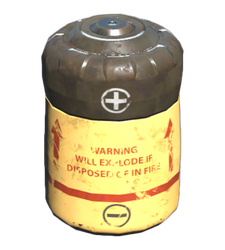 Fusion cells are a type of ammunition in Fallout 76.

This section is transcluded from Microfusion cell. To change it, please edit the transcluded page.

Microfusion cells are small energy-production units roughly the size of the palm. Each cell is a self-contained fusion plant, complete with its own fusion reactor.[1][2] They were invented in 2066 by U.S. scientists as a potential solution to the energy crisis amid the Resource Wars.[3] As fusion often uses combustible hydrogen isotopes and requires an enclosed space with sufficient pressure and temperature, microfusion cells may explode if ignited.[4] The No. 1040 MF model is able to provide 1040.8 DC volts and has both positive and negative terminals.[5]

Fusion cells are an energy ammo type, specifically used by laser weaponry such as laser guns and their modded variants.

With the Ammosmith perk or Ammo Factory legendary perk, the crafted amount of fusion cells increase incrementally, coinciding with the perk's added percentages, crafting more cells for the same amount of materials.