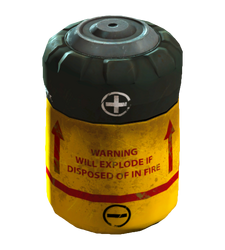 The fusion cell is a type of ammunition in Fallout 4.

The fusion cells are used by laser weapons. Fusion cells can be purchased from various merchants within the Commonwealth and looted from enemies using energy weapons.

Another four to be fired by Rosalind Orman

Ten cells at the SRB

Eight cells at the sniper's hideout

Another four in a nearby crate

Eight are found next to a dead Minuteman at the Fort Hagen filling station
Español Français Português Русский Українська 中文
Community content is available under CC-BY-SA unless otherwise noted.
Advertisement