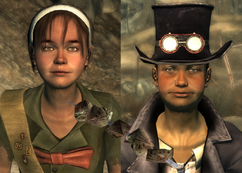 “They say the fungus grows in the pools where the first Lamplighters dumped the mungos. That's about the most they ever helped us. I don't know how true that is, but I know sometimes the scav team comes back with this strange meat that tastes terrible, but the fungus loves it. I don't know where they find that meat, but if you could bring some back, I'd be glad to trade fungus for it.”— Eclair

Fungus Deal is an unmarked and repeatable quest in Fallout 3.

Talking with either Lucy or Eclair begins this quest.

Lucy states she needs Buffout, from which she can derive a useful treatment for Rickets. Little Lamplighters are subject to malnutrition due to lack of exposure to the sun.

Eclair, Little Lamplight's cook, reveals that he is in need of strange meat, which is actually human flesh. Eclair explains that there is a fungus that grows in the cavern's pools, and it makes up an important part of the children's food supply. This fungus seems to thrive on meat, especially strange meat, a discovery the first children of Little Lamplight made when they threw the bodies of the dead adults into the pools.

The Lone Wanderer must get Mayor MacCready to agree to the exchange deal. It appears the Lone Wanderer requires about 50 Barter or the Child at Heart perk to make him agree. A speech check is available (and still so, after doing the Barter check) and if passed, the Lone Wanderer threatens MacCready into handing over 10 cave fungi. However, Eclair will no longer trade cave fungus, or any of his other goods (he will instead say "Well, you're cut off. Go scrounge your own food."), and Lucy will act as if MacCready was never negotiated with. Doing the speech challenge is ill-advised.

With MacCready's approval, Eclair and Lucy will both trade one unit of cave fungus for three pieces of strange meat or three Buffout.

Retrieved from "https://fallout.fandom.com/wiki/Fungus_Deal?oldid=3099860"
Community content is available under CC-BY-SA unless otherwise noted.