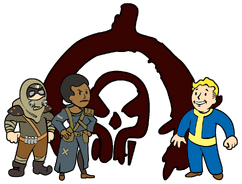 “Recruit Gail and Ra-Ra for the Vault 79 heist.”

Fun and Games is a main quest for the Raiders in the Fallout 76 update Wastelanders.

Lucky Lou is the raiders' ticket into Vault 79, but in order to ensure they can overcome any opposition inside, Meg wants Gail and Ra-Ra onboard. The big, burly super mutant is going to be the heavy artillery to counter whatever - and whomever - they find inside.

To start, the player has to speak to Gail at the The Core, and ask about where Ra-Ra is. With Charisma 8+ they can cut straight to the chase, otherwise they have to navigate the dialogue tree without angering her. Calm is a strong trigger, as is acting indifferent or irate. Once that's done, Gail will explain that Ra-Ra is in danger and vaguely describe Grafton Steel as the last place she saw her.

Next, the player has to travel to Grafton Steel and enter Grafton Steel Underground from the marked grating below the site's main draining pipes. Once inside, they have to destroy the security robots in the immediate vicinity that have cornered Ra-Ra. All robots level with the player and may include a legendary spawn. There are some on the ground floor After entering via the pipe entrance, and more up the stairs to the second floor. Once the robots are gone, Ra-Ra will emerge from the ventilation shaft by the security gate.

Next, speak to Ra-Ra. She will explain that she needs to find her favorite toy, Bunnabun, before she'll leave. It's impossible to convince her otherwise. To get past the security gate, the player has to speak to Ra-Ra again. She will remark that the door is locked. The player has the dialogue option to try finding another way around but ultimately there is none. Once asked about the door, Ra-Ra will offer to get past the door by using the ventilation pipes. She will enter and appear on the other side, pressing the emergency response button, summoning more robots. Once they're defeated, the lockdown for sector alpha will lift.

Once they are defeated, the player has to speak to Ra-Ra near the next security gate (offering feedback on her button pressing habits). Once the security doors are opened, Ra-Ra will enter another ventilation pipe across the shut door and into an open area on the other side. The player will need to traverse the area around the perimeter defeating the additional robots on the way. Ra-Ra will drop out of the vent and mention that she had to take a break due to the heat and say that she's hungry. The player can offer her any cooked or pre-packaged consumable from their inventory (for example, Sugar Bombs) to her in exchange for a minor boost to raider reputation. She will thank the player and open the locked security doors after entering the ventilation pipes again.

After passing through the next hallway, the player will enter a two-story area with a robot pod. An Assaultron will spawn from the pod and will have to be defeated to access the pressure sensor override terminal upstairs. The terminal has to be used to open the locked security doors below. The next hallway contains a power armor station with a unique looking helmet. Ra-Ra can be asked to open the door. If the player was nice to her before, she will agree with no conditions, otherwise, they will have to ask nicely for her help to open the locked room. The prototype steel mill helmet created by Grafton Steel as part of its military contract is a level 30 spawn, but collecting it will automatically unlock the corresponding schematic for cosmetic modifications.

In the next large area, the steel mill foundry known as Bravo Sector, Ra-Ra needs help with turrets and more robots. The player has to traverse the control rooms to defeat the robots and shut down the turrets via the security terminals, allowing her to pass safely. The terminal password is on a desk just to the right of the first wall mounted security terminal. After shutting down the turrets by diverting the power, the player simply has to use the security door terminal to open the door. Then they simply have to continue along the hallways and catwalk to access the second control station with another security terminal and the password on a nearby desk. After shutting down the second set of turrets, Ra-Ra can safely move forward. The second security door is opened the same way, through the terminal. Through the door on the left and a catwalk, Ra-Ra awaits. Optionally, the player may now explore the lower level of the sector, although an Assaultron will appear to guard the area.

Speak to Ra-Ra about the locked door. She will mention that a skeleton she found in the vent had a keycard, which she will give to the player, along with the Grafton Steel infiltrator's note. The player has to use the keycard on the ID reader to open the door. After traveling down the hallway and defeating more robots, they meet up with Ra-Ra again after the last security door door. Ra-Ra will mention finding a pulse grenade and drop it from the vent. The player has to continue to the locked security doors straight down the hall, defeating two more robots that spawn.

Past the unlocked security doors lies the final area of the quest. Bunnabun is next to a dead radrat. Collecting it will cause a legendary sentry bot to spawn from a nearby robot pod. The sentry bot will attack and Ra-Ra will offer help by dropping explosives from the vent for the player to collect. Once the sentry bot is defeated, the player simply has to speak to Ra-Ra again to tell her about the Vault 79 raid, and she will go back to the Crater.

Finally, speaking to Meg at the Crater Core will complete the quest and provide both muscle and a swift thief for the Vault 79 heist.

In order to obtain unique rewards, including a unique power armor helmet paint only available during this quest, the player character must be nice to Ra-Ra in dialogue. Otherwise Ra-Ra will be unwilling to help retrieve the item and later on, another unique item, in Vault 79.

Retrieved from "https://fallout.fandom.com/wiki/Fun_and_Games?oldid=3426008"
Community content is available under CC-BY-SA unless otherwise noted.