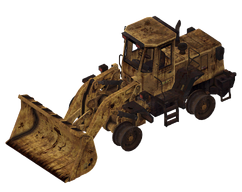 The front loader is a vehicle found in the Mojave Wasteland.

The front loader is a large, robust heavy lifting construction vehicle designed to dig into large amounts of dirt, rocks, and debris and haul it somewhere else. The engine that powers the vehicle is in the back, to protect the engine from hazards such as boulders or debris falling from the lift in front of the vehicle.

The color is a slightly dark shade of yellow, that along with the years of rust, exposure, dust, and grime, gives it an even darker tone in color. The four wheels it runs on has had its tires removed.

Side view
Add an image to this gallery
Retrieved from "https://fallout.fandom.com/wiki/Front_loader?oldid=3261766"
Community content is available under CC-BY-SA unless otherwise noted.