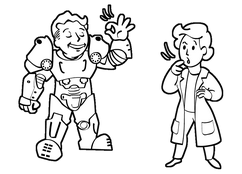 During the infiltration of the Institute, Elder Maxson orders the Sole Survivor to make contact with a Madison Li and convince her to work on a "special project" for the Brotherhood of Steel. Find her within the Institute in the Advanced Systems division and let her know that the player character has been sent to find her (or tell her directly that they sent by Brotherhood.).

In order to ensure Doctor Li's trust, one must agree to recover evidence regarding an accident that supposedly killed her colleague, Doctor Virgil. His former lab is in a sealed section of the Bioscience Division. There's a back entrance with a master lock terminal in the main room of the Bioscience lab leading directly to the main room (avoiding all of the security), and also the main entrance to it found at the end of some seemingly abandoned storage halls and rooms, behind a novice-locked door. Once in the FEV lab, travel through it to the end room, where the Brian Virgil personal log 0176 holotape which must be returned to Li is located. The lab will be defended by several turrets and a level-dependent assaultron which may be hard to fight for low-leveled player characters due to the sealed environment but is otherwise uninhabited. Once in the last room, locate the holotape, which can be found by an active terminal. While there, one can also pick up Virgil's serum, on a nearby table, that must be returned to him as part of a Virgil's Cure.

Return to Doctor Li and hand over the holotape. Then continue with the main quest Institutionalized. Upon leaving the Institute, return to the Prydwen and inform Elder Maxson.

Retrieved from "https://fallout.fandom.com/wiki/From_Within?oldid=3324473"
Community content is available under CC-BY-SA unless otherwise noted.
... more about "From Within"
RDF feed
Has platform
PC +  and Playstation 4 +