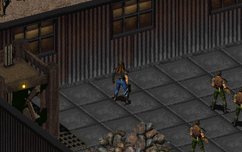 “His name's Morton, and they call him Frog 'cause he croaks people.”— Earl Marion

Frog Morton is one of the four Morton brothers.

Frog Morton is a rough-looking person.[1] He and his gang can be found in the mining town of Redding after accepting the quest "Kill Frog Morton" from Sheriff Marion. "Frog" is stated to be a nickname that Morton gave himself, as "he makes people croak". His real name isn't stated. Sheriff Marion states that the terrible pun is enough to warrant his death.

Kill Frog Morton: In-battle, Frog Morton wields a H&K G11, which can do great damage, and a leather jacket. Morton's gang is composed of nine people of two categories:

Frog easily has the highest damage output, so it is advised he be killed first. Once Frog falls, his minions will die with relative ease. It should be noted that the fight can be made a bit more complicated due to many rats that infest Morton's warehouse. The player is advised to clear out the rats before accepting the quest, to make the fight a bit easier.

Frog Morton and his gang appear only in Fallout 2.

Retrieved from "https://fallout.fandom.com/wiki/Frog_Morton?oldid=3073077"
Community content is available under CC-BY-SA unless otherwise noted.