Frogs are creatures found in Appalachia.

Usually found near bodies of water, these frogs have mutated from those living prior to the Great War. The front legs have developed into powerful arms able to lift the body off the ground, rendering the smaller rear legs idle during movement. The long toes of the front arms are tipped with sharp talons.

Frogs are marked with a distinct bright-blue glow and occasionally discharge crackling arcs of electricity. The glow is similar to that of Nuka-Cola Quantum, showing similarities to the Nukalurks found at Nuka-World in the Commonwealth and the Nuka-Cola plant in the Capital Wasteland. The mouth is filled with numerous small, pointed teeth, and the back is covered in sharp quills.

Frogs are non-hostile with very few Hit Points, meaning they can be easily killed. They may drop uranium ore and glowing blood packs.

A frog that has been infected by the Scorched Plague.

Frogs appear only in Fallout 76. 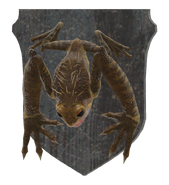 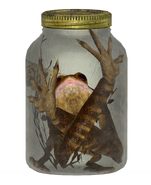 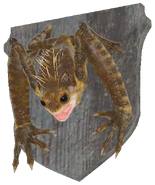