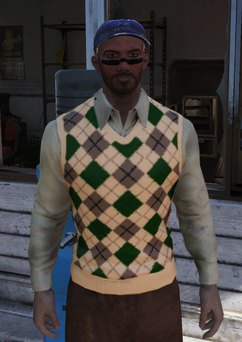 Fritz is a former raider living at the Whitespring in Appalachia in 2103.

Once a raider, Fritz has denounced that type of life, in favor of the posh and fancy lifestyle of the pre-War elites, largely because he is bored. He dresses in a golf outfit he found on one of the bodies in the Whitespring, and spends his days at the driving range just down the road from the Whitespring golf club.

He puts on a fake British accent, yet if a speech check is passed, the player character can remark on the curiosity of the situation, leading to him abandoning the accent and confessing his ruse, before returning to the facade.[1]

Fritz will engage in dialogue about himself and the perks of being wealthy, on top of providing background information about the Whitespring. If a Perception check of 4 is successfully completed, he will reveal himself, though he will continue to speak in his phony accent, even after this check is passed.

If encountered during a nuclear strike on the Whitespring, he will be wearing a hazmat suit, and the same dialogue options will be present, despite being unable to see his face.

Fritz appears only in Fallout 76, introduced in the Wastelanders update.

Retrieved from "https://fallout.fandom.com/wiki/Fritz?oldid=3425892"
Community content is available under CC-BY-SA unless otherwise noted.