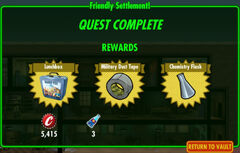 “A nearby settlement wants us to pay them a visit. What could go wrong?”

Friendly Settlement! is a daily overseer quest in Fallout Shelter.

Upon entering the first room, the vault dwellers may be attacked by a group of mole rats, sometimes with a broodmother. Defeat them and head into the next room, where yet another group of mole rats will be encountered; the same applies once passing through the elevator into the first room on the second floor. Upon entering the second room there are a couple of settlers; speaking to them and responding with "We ain't squares, daddy-o. We're as cool as the breeze." will earn the group two Nuka-Cola Quantums. In the room immediately behind them is another settler, who will again engage in dialogue; the option chosen will alter what the party is given.

Although the quest is complete at this stage, the party can head up to the third floor, where there is another group of mole rats and a group of raiders that can be fought.

You are likely to encounter radscorpions, radroaches (sometimes irradiated radroaches), and raiders on this variant, with the occasional raider leader. When you come across the first three friendly ghoul settlers, if you select "Hey, always “cool to be Ghoul”, you know what we mean?", you are rewarded with two Nuka-Cola Quantum. The second set of friendly ghouls will give you the choice between a rare weapon, a rare outfit, stimpacks, or rare junk. If you are doing the level 50 variant of this quest, you may get legendary rewards from the ghouls instead of rare items.

On this variant, you will face raiders, radscorpions, and mole rats. You may also come across a raider leader, a mole rat broodmother, and an irradiated radscorpion. If you come across the irradiated radscorpion, keep the health of the dweller that it is attacking high. Lower level versions of this quest may only have radroaches and glowing radroaches. Once you come across the librarian, if you select "remain quiet," you are given some Nuka-Cola Quantum. The second librarian will give you the choice of a weapon, an outfit, stimpacks, or junk as a reward. These rewards can be rare or legendary depending on the quest level requirement.

This variant is mostly raiders and mole rats as enemies. Higher-level versions may have radscorpions and raiders instead. When the player reaches the room with the settlers, it turns out they are three raiders who are looking to retire. "Hey there, Dwellers. No need to be alarmed. We're not Raiders anymore. We're retired." "A bunch of us decided to earn a living the honest way." You are given three dialogue options. "Just keep your hands where we can see them." "Good for you! Honest work is way better than raiding!" "You're lucky we aren't here to kill you."

You are rewarded with a lunchbox.

In the last few rooms, the former raider leader is waiting, and you are given a choice between a rare weapon, a rare outfit, stimpaks, or a rare crafting material as a guaranteed reward. If you are doing a higher-level version of the quest, you may get legendary items instead, especially if the level requirement is 50. Legendary plasma rifles are typically rewarded if you choose the weapon option on level 50 quests. 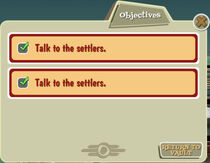 Rewards (variant C)
Add an image to this gallery
Retrieved from "https://fallout.fandom.com/wiki/Friendly_Settlement!?oldid=3260128"
Community content is available under CC-BY-SA unless otherwise noted.