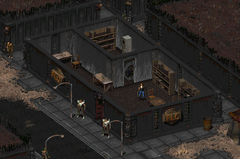 “Sorry pal, but I don't do more than one loan at a time. You want more, you gotta start paying. This is a business, not a charity.”— Lorenzo

The Friendly Lending Company, known mostly as FLC, is ostensibly a business operation lending out funds owned by Decker[1][2] to those in need.

In reality, the FLC is a loan shark operation, baring accusations by the Hub police of extortion, with several thousands of caps on hand; stored in the safe of the organization's main office in the Hub's Downtown area. The FLC is managed by Lorenzo "the Munificent" Giovanni, under the control of Decker whose philosophy of being a respectable businessman is summarized by his words, "You don't show us respect, you get hurt. How much more respectability can a man ask for?"

FLC gives out loans on a graduated scale of 200 caps, at an interest rate of 10% of the original loan, with a maximum of 1000; potential customers must build a credit base at each 200 cap unit to be able to receive a loan on the next additional 200 cap unit. FLC allows up to 10 days before the loans are due.

Retrieved from "https://fallout.fandom.com/wiki/Friendly_Lending_Company?oldid=3329069"
Community content is available under CC-BY-SA unless otherwise noted.