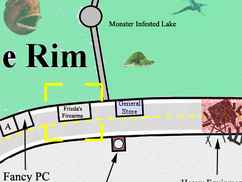 This is a shack-like structure that houses a lot of shelves filled with an assortment of firearms and ammunition. Frieda Van Graff, an African-American woman, is the proprietor. Her wares will vary from time to time, with better firearms and ammunition coming later in the game. If the Prisoner has done unsavory things in Hoover Dam, then Frieda will leave Hoover.

Frieda's Firearms was going to appear in Van Buren, the canceled Fallout 3 by Black Isle Studios.

Retrieved from "https://fallout.fandom.com/wiki/Frieda%27s_Firearms?oldid=2295371"
Community content is available under CC-BY-SA unless otherwise noted.