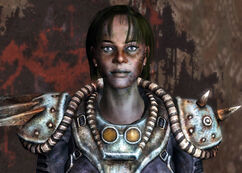 “Well now, a grinder made it out of the hole. That hasn't happened in a while. Well, I hope you have some money, newbie.”

Friday is a merchant and mechanic of Friday's Repairs in The Pitt around 2277.

A mild-mannered but ruthless businesswoman, she handles a small repair shop in the Downtown area of The Pitt, selling a variety of equipment and mending broken weaponry. Business is slow, as Pitt slaves are usually beaten rather than given caps to spend.[1]

She can be found in Downtown after the battles in The Hole have been completed. Go up the stairs by Midea's quarters and run across the planks. She's generally located right above Kai.

Friday appears only in the Fallout 3 add-on The Pitt.

Retrieved from "https://fallout.fandom.com/wiki/Friday?oldid=3244679"
Community content is available under CC-BY-SA unless otherwise noted.