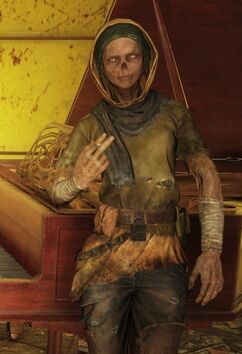 “Interested in the lives of the rich and famous?”— Frida Madani

Frida Madani is a ghoul in Appalachia in 2103.

Frida Madani used to work at the Garrahan Mining Headquarters as a receptionist before the Great War, getting to know the executives, as well as being invited to high-class events,[1] as well as getting to know some of the family's internal affairs, such as Isaac Garrahan's sloth obsession.[2] After the Great War, around the time when the Scorched Plague ravaged Appalachia, she managed to escape to the coast. However, the conditions and radiation there were far worse than Appalachia, turning her into a ghoul.[3] She is frustrated at the discrimination she faces as a ghoul and fears turning feral eventually.[4]

She is mixed about her feelings regarding the Garrahan family, as she dislikes how they profited off their miners' labor to live in luxury while billing themselves as champions of the working class, but notes that they were friendly in-person and she herself had a comfortable job, as well as having a soft spot for the family.[5][6]

As of 2103 she spends her time wandering around the ground floor of the Garrahan Estate and digging through the Garrahans' former belongings, such as drinking plenty of Vivian Garrahan's wine collection.[7]

Passing a Luck 4+ check will prompt her to give the Vault Dweller a bottle of wine which she claims is some of Vivian Garrahan's vintage.

Frida Madani appears only in Fallout 76, introduced in the Wastelanders update.

Retrieved from "https://fallout.fandom.com/wiki/Frida_Madani?oldid=3462213"
Community content is available under CC-BY-SA unless otherwise noted.