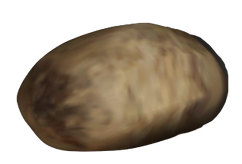 The fresh potato is a consumable item found in Fallout 3.

It restores 10 Hit Points (12 if the food sanitizer is active) without any of the harmful Radiation effects. It is one of the few edible food items that aren't inherently irradiated, besides other fresh fruits or vegetables.

Retrieved from "https://fallout.fandom.com/wiki/Fresh_potato_(Fallout_3)?oldid=3269594"
Community content is available under CC-BY-SA unless otherwise noted.