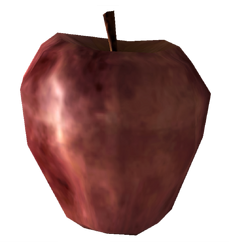 The fresh apple is a food item found in Fallout: New Vegas.

Unlike most common fruits still found in the wasteland, fresh apples restore Hit Points without causing radiation damage at the same time. Fresh apples are one of the few edible food items that are not irradiated, besides other fresh fruits or vegetables, and food found in an uncompromised vault. Additionally, in hardcore mode, it can reduce the player character's Starvation and Dehydration.

Fresh apples are an ingredient in trail mix.

Retrieved from "https://fallout.fandom.com/wiki/Fresh_apple_(Fallout:_New_Vegas)?oldid=3163133"
Community content is available under CC-BY-SA unless otherwise noted.