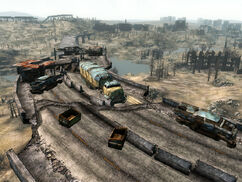 The freeway raider encampment is a raider fortress on top of a highway just north of Vault 101 in the Capital Wasteland in 2277.

A full scale raider encampment, lying atop a highway. It is made up of a variety of broken-down vehicles. At any level, at least ten raiders reside in the encampment. This area is very close to Vault 101, and could be dangerous to approach at a low level. Two of the raiders have higher level weapons compared to the other. One has a sniper rifle and the other carries a flamer, as well as eight other raiders with low level weapons and gear.

The freeway raider encampment appears only in Fallout 3.

Retrieved from "https://fallout.fandom.com/wiki/Freeway_raider_encampment?oldid=3491920"
Community content is available under CC-BY-SA unless otherwise noted.