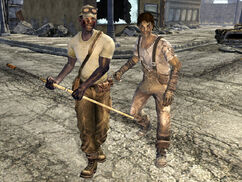 “What's your rush? The boys and I here want to get to know you better.”

Freeside thugs are bandits living in Freeside in 2281.

Most of the New Vegas locals living in Freeside roughly scrape out a living operating as thieves, pickpockets and muggers always looking for a victim.[1] Driven by abuse of chems, poverty and a lack of food, water, and other essentials, the gangs prey on any foreigner who appears to carry lots of caps, especially if its a wealthy gambler. The Kings and the more combat-experienced locals offer their protection services to any newcomer wishing to cross through Freeside without being accosted by thugs.

Poorly-organized, the thugs operating in Freeside frequently get their heads blown off by The King's men. Their kit is no different than the average wastelander; old rags and beat-up civilian garb. Armed only with basic melee weapons such as knives, baseball bats and tools, these bandits typically come in pairs, or groups of three or four. Regardless, the Freeside thugs are no match for well-armed and prepared travelers, bodyguards working for tourists, the Kings or the NCR.

Retrieved from "https://fallout.fandom.com/wiki/Freeside_thug?oldid=3186808"
Community content is available under CC-BY-SA unless otherwise noted.