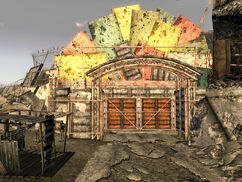 Freeside's north gate is a location in the Mojave Wasteland in 2281. This location, along with the east gate, is one of the two entrances into Freeside.

Freeside's north gate is run-down and is simply guarded by a handful of Kings members. The roads leading out are cracked and broken. The location is a high-traffic area for barter and commerce, and it's not surprising to see many traveling merchants around the area selling their supplies. Both the Gun Runners and the Crimson Caravan Company reside in the vicinity, boasting a large selection of guns, ammunition, and armor of various kinds, making this particular loop a lucrative trade circuit for any aspiring merchants.

Freeside's north gate is the closest location to the Old Mormon Fort, where the Followers of the Apocalypse perform their humanitarian functions safely behind the walls of both Freeside and the fort.

Freeside is based on the real world location of Fremont Street and the surrounding neighborhoods, part of Las Vegas, Nevada, north of the Las Vegas Strip.