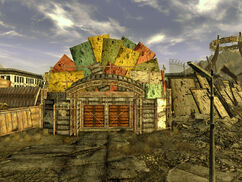 Freeside's east gate is a location in the Mojave Wasteland in 2281. Located just northeast of the Gun Runners, it is one of two direct routes that lead into Freeside, the other being Freeside's north gate.

Freeside's east gate opens to the portion of Freeside that contains Mick & Ralph's, as well as the Old Mormon Fort. These are the only two openly inhabited buildings in this portion of Freeside. The ghoul Rotface is usually sitting against a wall near Mick & Ralph's. Max and Stacey can be found chasing each other just inside the gate near a few bodyguards for hire.

Heading into the ruins to the left of the entrance, across from Mick and Ralph's, a dead body can be found in the western corner of the destroyed building. The corpse is simply named "man". Within his inventory is a destroyed collar and pre-War casual wear. The collar is similar to the slave collar, and the one given by the Brotherhood of Steel at the beginning of the quest Still in the Dark. Lying next to the man is a wrench, evidencing the man's failed attempt to remove the collar.

Retrieved from "https://fallout.fandom.com/wiki/Freeside%27s_east_gate?oldid=3320498"
Community content is available under CC-BY-SA unless otherwise noted.