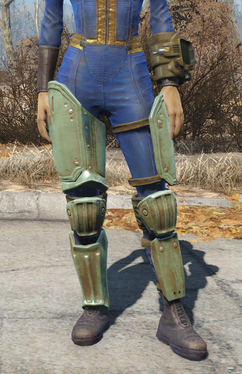 The Freefall Legs are a unique set of armor with the Acrobat's-legendary effect in Fallout 4.

The Freefall Legs were developed by an intern named Jack Rockford at Mass Fusion's Product Engineering department. He was inspired by the shock absorption system within power armor, and came up with the idea to use a kinetic repulsion system instead of hydraulics to make it less bulky. He had planned to show them off at the office's rooftop Christmas party by jumping off the roof with them on, and was keeping them in his safe until then. On the day the bombs fell, he was trapped inside his office and had forgotten the key to the safe. His skeleton can be found in a chair near the safe.

As the name suggests, when both pieces are worn, the Freefall Legs provide complete negation of fall damage to the player character. They are essentially combat armor legs with a unique legendary effect.

It is possible to spawn with multiple different stats and different mods. Energy resistance is always 2 less than damage resistance.

It is possible to spawn with multiple different stats and different mods. Energy resistance is always 2 less than damage resistance.

The Freefall Legs are located in a safe in a small room near the top of the Mass Fusion building's interior, inaccessible to the player character unless they are currently using a set of power armor with a jet pack equipped. They are also accessible if the player character exploits a glitch with a trashcan at the bottom floor, to slide up the walls.

The legendary effect of Freefall Legs, as well as the name of the intern who created them (Jack Rockford), seem to be a reference to the Boots of Springheel Jak, a unique item from The Elder Scrolls IV: Oblivion.

Retrieved from "https://fallout.fandom.com/wiki/Freefall_Legs?oldid=3298482"
Community content is available under CC-BY-SA unless otherwise noted.