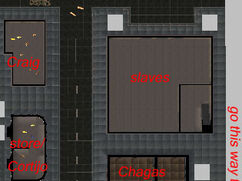 Free Slave X was going to be a quest in Van Buren, the canceled Fallout 3 by Black Isle Studios.[1]

This works just like "Free the Slaves," except you're just trying to free a particular slave you've been told about by someone in another area, such as a Mormon missionary, an NCR scientist, a kid from Hoover Dam, etc. some caravan guy, whatever. The PC will also have to deal with the other slaves that want to be rescued, which may take additional shenanigans (even more sneakiness, arranging to have the chosen slave meet you in a far part of the Save-Mart, drugging the other slaves, etc.).

Retrieved from "https://fallout.fandom.com/wiki/Free_Slave_X?oldid=3146482"
Community content is available under CC-BY-SA unless otherwise noted.