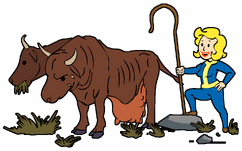 “Guide a pack of abandoned Brahmin back home.”

Event: Free Range is a public event in Fallout 76, introduced in the Wild Appalachia update.

The event is simple enough in the primary objective: Three stray brahmin need to be escorted back home to their farm that they strayed away from. However, the way is littered with various enemies who will target the brahmin and attack them. If they all die before reaching the destination, the event is failed. As long as one survives, the event is completed. However, while most enemies can be easily dealt with by multiple player characters working together to protect the brahmin, the final obstacle before completing the event is dealing with one or more legendary Sheepsquatch that will be the final threat to the brahmin. Due to the Sheepsquatch having very high health and defense, it could be the difference between keeping all three brahmin alive, or walking away with fewer rewards if one is slain by the Sheepsquatch, especially if the Sheepsquatch uses its ranged, large-radius attack to hit all the surviving brahmin at once. Once the Sheepsquatch is slain, the event is completed, and rewards are given based on how many brahmin survived.

Add a photo to this gallery
Retrieved from "https://fallout.fandom.com/wiki/Free_Range?oldid=3429392"
Community content is available under CC-BY-SA unless otherwise noted.