The Free Radicals are a raider faction in Appalachia.

The Free Radicals are a band of ex-cons hailing from the Western Maryland Correctional Facility. Roper, the former head guard of the prison, freed them and became their leader.[1] Coming from Maryland,[2] they reached Appalachia looking for the treasure that had been broadcasted on the radio. Looking for a place to stay, the group set their eyes on the WV Lumber Co. facility on the shores of the Ohio River, in the northwestern corner of the region. The area was once inhabited by a garrison of super mutants, but the Free Radicals managed to clear them out and establish a new base of operations in Appalachia, throwing the mutant bodies into the river[3] or burning them up.[4] Ever since, they have heavily fortified the lumber mill. They also have a good number of customized vehicles, including a limousine owned by Roper,[5] a Pick-R-Up, a truck, several construction vehicles and a fishing boat.

Though weak at hunting and farming, they have found a solution in extorting settlements and businesses, such as Daniel's group at Anchor farm, for food in exchange for protection. They are also particularly interested in "The Treasure of Appalachia," and have men searching for it 24/7.

They have been a thorn in the side of The Wayward and Duchess, who enlists the Vault Dwellers to help shut down their interference with her business.

The Free Radicals will give the player character the Radicals face mask if sided with during the Wayward questline.

Free Radicals appear only in Fallout 76, introduced in the Wastelanders update.

Free Radicals may appear headless, with nothing rendering from the neck up.[6][verified]

Roper, the gang's leader, with another member

A member threatening to kill Mort

Davey with another member 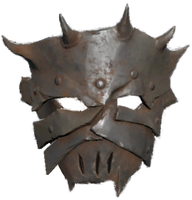