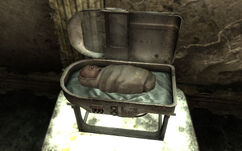 Decide Marie's and The Pitt's fate.

“I understand. We've all got a past, and damn few of us have reason to be proud of it.”— Lord Ashur

Free Labor is a quest and achievement/trophy in the Fallout 3 add-on The Pitt.

As soon as the three rounds of fighting in the Hole, Krenshaw arrives to tell the Lone Wanderer that they are free and Ashur wishes to speak to them in Uptown. The Wanderer will then be free to retrieve the equipment taken by the Pitt raiders from the footlocker in the middle of the room and head to Ashur. Attacking any Pitt raiders in Downtown before speaking to Ashur will turn the raiders in Uptown hostile. Should they become hostile, waiting a few in-game days will be needed for them to be friendly again.

Speak to Ashur in Haven

Once there, Ashur asks the Wanderer to kill Wernher, as he's been rallying the slaves and a riot would result in meaningless death. Passing a Speech challenge, the player character can tell Ashur that they have never met Wernher or that they didn't like his looks. He will mention the cure and even advise that his wife must be spoken with to know more. Speaking honestly will also yield this result. After that, choose to either join him or refuse his offer. Here, either decide to kill Wernher, kill Ashur or wait until he is called away and investigate Haven for the cure.

Take a side by simply leaving the building with or without the cure. Optionally, Ashur's diary can be read. It is locked in a safe in Ashur's room (at cost of negative Karma for picking the lock) before making a final decision.

If the choice is made to leave the "cure" or kill Wernher (both have no effect on Karma if done correctly), slaves will be rioting all through the Pitt. Killing them may cause Karma loss, but they are easily avoided as most are equipped with auto axes or steel saws.

Wernher may be located by talking to Midea, killing her and taking a note from her corpse or by reading any number of the notes located in her quarters (the Child at Heart perk gets her to admit the kidnapping was Wernher's idea and that she didn't think about what freedom would take). He is found in his hideout, accessed through a door in the steelyard which was previously inaccessible. Either ask Wernher to leave forever by passing a Speech check or using the Black Widow perk, or kill him for no Karma loss if Wernher shoots first. Travel back to Haven and talk to Ashur to complete the quest.

If a Speech check or Black Widow perk is used to persuade Wernher to leave, the key to the Pitt underground will be on the table with various scientific instruments. Because one has sided with Ashur, the floodlight control computer in the underground will be gone and will lead to a dead end, as this is also what opens to the door that leads to the Haven courtyard.

After completion, access is given to the ammo press, a quest is given to collect and return teddy bears to Sandra, and the Lone Wanderer is able to continue collecting steel ingots for Everett. Additionally, the perk Booster Shot is received, which increases radiation resistance by 10%.

To return to the Capital Wasteland, return to the Pitt train yard at the southwest edge of the map and activate the hand-pump rail cart.

Bring the cure to Wernher

To side with Wernher, either kill Ashur directly or wait until he is called away and steal the cure. Either way, the Wanderer will be attacked by Ashur's wife and the raiders. If his wife is killed in Haven one will gain negative Karma. After making one's way out of Haven, the Wanderer will then find a fight between slaves and raiders. Return to Midea's quarters, where she will ask the Wanderer to show her the cure, revealing she knew it was a baby all along. She will hand over a note advising that Wernher has everything arranged and is waiting in his hideout inside the steelyard. After speaking with him and handing over Marie, he will tell the Wanderer that they must find the "floodlight control" and shut down the floodlights which are preventing the trogs from attacking Uptown.

After speaking to Wernher, he will give the player character a Stealth Boy. With the Black Widow perk it is possible to get a few stimpaks or ammunition from him as well. Leave Wernher's hideout and go to the underground entrance located at the opposite side of the tracks from the supply plant. Enter via a manhole at the very end of the train tracks, similar to the one in Paradise Falls. Once inside there are around two dozen trogs to fight, along with a Protectron which can be activated to help.

Head to a terminal where the floodlights can be shut off, then exit through the door leading to Haven's courtyard.

Here Lord Ashur and Sandra will confront the Lone Wanderer (if they survived their initial encounters with the player character) and will quickly become hostile and attack. Even if the player character remains hidden the dialogue will be triggered. One can kill Ashur and loot his body (he drops his unique power armor as well as the key to the Pitt underground) or leave him to his fate: if the fight with Ashur is avoided, a horde of trogs will swarm the Haven courtyard and engage Ashur and any of his surviving Pitt raiders in combat.

Siding First with Wernher then with Ashur

One can steal the baby without harming Sandra, kill the raiders, talk to Wernher and just refuse to go along with the second part of his plan and decide to return the baby to Ashur. A Speech (or Black Widow) check must be passed, otherwise Wernher will have to be killed. Ashur is upset, but ultimately accepts what happened. The Wanderer will have the option to ask him to free the slaves but there is no way to get him to agree. Sandra, however, will not forgive the player character for kidnapping her daughter but will still accept and pay for toys while always having some snarky comments.

If one decides to kill Ashur and return to Midea's house, they will find Wernher outside. He tells them that he will be reorganizing the city and that word should be spread out of the Pitt in order to get more workers down in the Mill. He also advises that the Wanderer has earned their share of the ammo press and that they can gather steel ingots and give them to the foreman in exchange for gear (a continuation of the Mill Worker quest). The perk Booster Shot is also given, which increases Radiation Resistance by 10%.

By talking to Midea, the quest to collect and return teddy bears to her is given. Haven, however, will be locked so any loot left inside will be inaccessible. The raider vendors Friday and Harris will also be dead, killed by the ex-slaves. Their keys can be found on their bodies to loot their store inventories.

Since Ashur is dead, The Lone Wanderer can declare themselves the new leader of the Pitt (depending on the dialogue choices made.) If they do, Wernher will begin to call the player character "boss." If the Lone Wanderer does not choose to become new boss however, Wernher's dialogue implies instead that he is taking charge of the city.

To ensure the Lone Wanderer becomes the new leader, select the dialogue option "That leaves me as the new Lord of The Pitt." Regardless of this, one will quickly learn from Midea that she does not "know how Ashur kept these people from tearing one another apart," hinting that Wernher's idea of freedom may have been no better than leaving them under the organized iron-fist of Ashur in the first place.

Where Marie may be tested on by Wernher
Add a photo to this gallery
Retrieved from "https://fallout.fandom.com/wiki/Free_Labor?oldid=3428864"
Community content is available under CC-BY-SA unless otherwise noted.