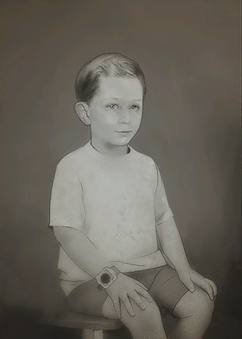 Frederick "Freddy" Wood (born 2070) was a child that was kidnapped from Wavy Willard's Water Park.

Freddy, the son of Grafton Steel head Arthur Wood, was being taken care of by Miss Annie during a birthday trip to Wavy Willard's Water Park on October 17, 2077, when he was approached by a strange man who said he had a "surprise" for Freddy. The man convinced Freddy to take off his KidSecure ID and come with him. At the time of disappearance, Freddy was 3'1" and weighed 51 lbs.

The strange man was none other than Freddy's uncle, Otis Pike, who decided to kidnap Freddy after being fired from his job at Grafton Steel for inciting protests at the steel mill. Freddy accompanied Otis to Grafton Dam, where he remained ignorant of the situation he was in. Freddy became an annoyance to Otis and in turn, found his uncle to be mean and decided to plan his escape. Thanks to his time in the Pioneer Scouts, Freddy built a snare trap that successfully trapped Otis and allowing him to walk out from the dam.[1] He returned home during the start of the Great War, where he met an agent of Vault-Tec that had come to take him to the safety of one of the nearby vaults, as Arthur had paid Vault-Tec to safely escort his son. Freddy, who had not had a chance to reunite with his father, left him a hastily scrawled note before being escorted to safety.[2]

Freddy is mentioned only in Fallout 76.

Retrieved from "https://fallout.fandom.com/wiki/Freddy_Wood?oldid=3196847"
Community content is available under CC-BY-SA unless otherwise noted.