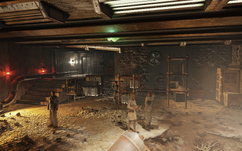 Division of Wealth
All That Glitters

The Freddy Fear's basement is an unmarked location within Freddy Fear's House of Scares in the Mire region of Appalachia in 2103.

This basement is located below Freddy Fear's House of Scares, accessible via a black cellar door near the front of the main building. When first entered, it is mostly empty, though it does have an armor, weapons, and tinker's workbench located near the front entryway. Once the quest All That Glitters is started, the Motherlode will have drilled out a path from the basement through some abandoned mining tunnels into Vault 79.

If the basement is revisited after completing Secrets Revealed, it can be seen that the tunnel has collapsed, making it impossible to reenter most of the vault.

The Freddy Fear's basement appears only in Fallout 76, introduced in the Wastelanders update.

Retrieved from "https://fallout.fandom.com/wiki/Freddy_Fear%27s_basement?oldid=3270719"
Community content is available under CC-BY-SA unless otherwise noted.