Washington, D.C.
Appalachia
“For all your Halloween needs!”— Poster advertisement

Freddy Fear's House of Scares was a Halloween costume company before the Great War.

A costume shop specializing in Halloween accessories with locations in Washington, D.C. and Appalachia. Advertisements for the company's line of costumes, including those of Lady Liberty, a Red Chinese Invader, American Soldier, Sock Hop Susie, and a Vampire can be found across the former United States, including around the Commonwealth and Mojave Wasteland. These posters informed viewers of both their wares as well as an upcoming costume contest slated to be held October 23.[1][2] 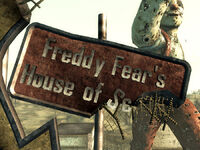 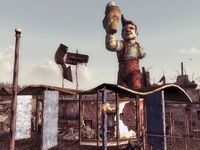 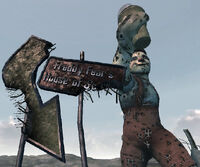 At the Atom Cats garage

In the Natick coffee shop