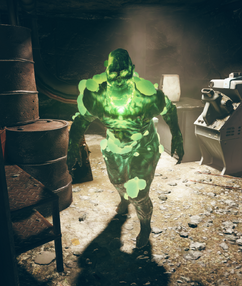 Key to the Past

Alfreda "Freddie" Lang is a glowing one at Blackwater mine in Appalachia in 2102.

Freddie went skiing in Appalachia after hearing that the snowmakers were being turned on at the slopes. Since her girlfriend, Lucie, did not like skiing, Lang went without inviting her for fearing Lucie might talk her out of going. While Lang was away, the Great War occurred, and Lucie did not survive. Lang felt guilt for the death of her girlfriend due to the circumstances.[1]

Lang survived the war and became the leader of Blackwater Bandits, one of the gangs that made up the Appalachia's raiders. The Bandits made their home in the Blackwater mine and were known for their stealth, being skilled enough to steal mini nukes from the Brotherhood of Steel.[2] Lang did not trust her gang well enough to let her guard down or reveal too much of her personality beyond the rough facade of raider boss, so she used the former supervisor's terminal as a diary to confide thoughts which she felt would show too much vulnerability.[1][3]

Rob, another member of the gang, tinkered with the uranium pump inside the mine. Over the course of several months, Rob accidentally and unknowingly released a substantial amount of radiation into mine as a result of his drunken tinkering.[4] The gang remained unaware of the radiation leak, and Lang believed it was an illness which had not subsided in a world without medical care. Lang traded the stolen mini nukes to the Cutthroats for additional chems, so that the Bandits could continue to offset the effects of the "illness."[2][5]

By 2096, the effects of radiation exposure were visible on Lang when she visited the raiders at the Top of the World, being described by Rose as "Not her usual bright and spirited self. Real sick. Her hair looked awful." After continued exposure, the Bandits died or ghoulified as a result of the radiation, and Freddie turned into a glowing one. Freddie left a final message on her terminal, with visible signs of mental decline, stating she intended to go deeper into the mine, where the radiation felt good.[6][7] Freddie remained in the mine until confronted by a Vault Dweller searching for the Blackwater Bandits key fragment.

Freddie Lang appears only in Fallout 76.

Retrieved from "https://fallout.fandom.com/wiki/Freddie_Lang?oldid=3371678"
Community content is available under CC-BY-SA unless otherwise noted.