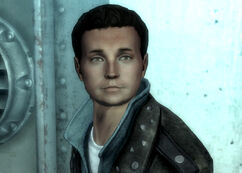 Future Imperfect
Trouble on the Homefront

“I tell you, those guards are getting nastier every day. One of these days, it's gonna turn real ugly. But I'll be ready for it.”

In the 2260s, Freddie is ridiculed by some of his peers. He is nicknamed 'Freddie the Freak' and is compared unfavorably to the comic book character Grognak the Barbarian.

In the early 2270s, Freddie is diagnosed with Vault depressive syndrome, or VDS, by the vault physician James. According to his medical file, Freddie suffers from lethargy, anxiety, and low self-esteem. Freddie copes with his insecurities and low self-esteem by acting out as a bully with his peers. James prescribes chlorpromazine for Freddie; however, James is worried that his patient might be permanently dependent on the medication.

On August 3, 2274, Mr. Gomez engages in small talk with Susie Mack. They talk about her family's malfunctioning heater and agree to meet at the cafeteria after the G.O.A.T. for lunch. Before the G.O.A.T., Freddie is nervous. After Edwin Brotch orders pencils down and everyone else has left, Freddie is struggling with two questions on the test. Question #5 has him hanging on a moral quandary - should he obey his grandmother and kill the other resident, or should he disobey his grandmother since killing is wrong? The other question, Question #10, baffles him as the answers are all the same and he isn't sure if this is a trick question.

Freddie Gomez appears only in Fallout 3.

Freddie, just before taking the G.O.A.T.

Retrieved from "https://fallout.fandom.com/wiki/Freddie_Gomez?oldid=3314545"
Community content is available under CC-BY-SA unless otherwise noted.