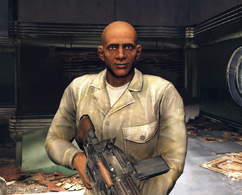 Duty Calls
Division of Wealth
All That Glitters
Secrets Revealed

Sergeant Fred Radcliff is a former U.S. Army soldier in Appalachia in 2103.

Sergeant Radcliff first enlisted into the Army during the onset of the Sino-American War, and was immediately shipped off to the frontlines. He described himself as a "dumb kid" who survived thanks to his squadmates, Captain Fields and Sergeant Thompson, watching out for him, with him losing only one toe to frostbite as compared to Thompson, who lost three.[1] Radcliff is the squad's technical expert, and he describes himself as highly knowledgeable about all manner of robots and systems.

All three - as well as several military working dogs, including Private Lucky - were later part of the original team responsible for moving the gold reserves at Fort Knox to Vault 79. However, the Vault closed, and they were left outside when the Great War struck. For years, they wandered, always staying near the region, returning when they heard it was safe enough to return.[2]

The squad eventually ended up in Pittsburgh, where they unsuccessfully attempted to maintain order. In the aftermath, seeing Captain Fields wounded, Radcliff ruminated on their survival and considered simply retiring and forgetting the past. However, they were convinced to hang on after hearing a broadcast from military remnants back in Appalachia, and became convinced to return "home."[1] On their return trip, the soldiers ended up following and observing the Settlers as the Settlers made their journey from the Pitt to Appalachia. Eventually, they all agreed to a meeting with the Vault Dweller at the ransacked bunker.[3] Radcliff also has quite a sense of humor and will often make jokes even during life-or-death situations.

Upon reaching Foundation, he and Jen begin to constantly bicker, leading some to insinuate they have mutual feelings for each other.[4] Radcliff will also express his desire to finally retire from his military life and settle down as a farmer.[5]

Radcliff appears only in Fallout 76, introduced in the Wastelanders update.

Retrieved from "https://fallout.fandom.com/wiki/Fred_Radcliff?oldid=3447144"
Community content is available under CC-BY-SA unless otherwise noted.