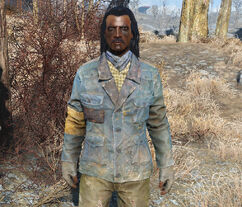 Fred O'Connell is a traveling merchant in the Commonwealth in 2287.

Fred appears as a random encounter, with a mercenary bodyguard. When spoken to, he explains that he doesn't have anything to sell at the moment, but is on his way to Vault 81 to restock. He can often be found outside Vault 81 at the makeshift campsite with two Gunner mercenary escorts.

He has also been found dead as the caravan leader of the ill-fated Stockton caravan and can be found at the site with two dead mercenaries and three dead brahmins, as part of the quest Human Error.

Fred O'Connell is listed as a caravan leader in the Caravan details note received from Honest Dan as part of the Human Error quest in Covenant.

Fred O'Connell appears only in Fallout 4.

Retrieved from "https://fallout.fandom.com/wiki/Fred_O%27Connell?oldid=3192528"
Community content is available under CC-BY-SA unless otherwise noted.